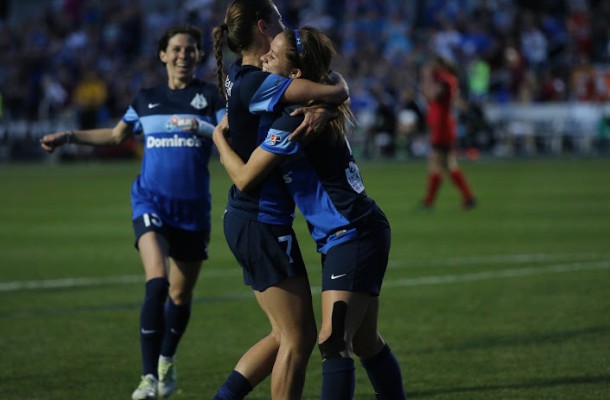 KANSAS CITY (April 23, 2016) — Despite playing most of the second half with just 10 players, FC Kansas City held on to earn their first point of the 2016 National Women’s Soccer League season.

Jogos casino online, Liberty native Shea Groom gave the Blues the lead in the 30th minute and Lindsey Horan scored the equalizer for Portland in the 78th minute of the 1-1 draw at Swope Soccer Village on Saturday night. FC Kansas City is now 0-1-1 and Portland is 1-0-1.

“Even though the score was tied 1-1, I feel like we won,” Blues coach Vlatko Andonovski said. “We played one of the best teams in the league, if not the best, with a man down for 40-plus minutes and managed to do well. All I can say is, I’m very proud of the girls.”

The Blues got off to a quick start with a shot in the first minute, which was blocked by Portland goalkeeper Michelle Betos. The Thorns responded with a shot of their own moments later. They stayed relatively even through the match with 11 and nine shots, respectively. The keepers had five and four saves.

Groom’s shot in the first half came off an assist from 2015 FIFA Women’s World Cup champion Heather O’Reilly. She met the ball with a diving header and slipped it just past Portland’s Michelle Betos.

The Blues took the lead into halftime, but shortly lost Groom due to her second yellow card of the match.

FC Kansas City will hit the road for a match against Seattle Reign FC at 6 p.m. on May 1.