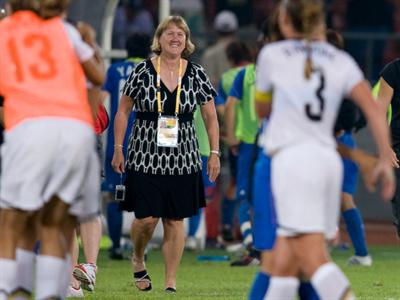 CHICAGO (Nov. 29, 2012) — U.S. Soccer president Sunil Gulati announced today that Cheryl Bailey has been named the Executive Director for the new U.S. Soccer-led women’s soccer league that will begin play in the spring of 2013.

Jogos casino online, Bailey served as General Manager of the U.S. Women’s National Team for five years from 2007 through 2011. A long-time athletics administrator who led the support staff for the U.S. team during the 2007 and 2011 FIFA Women’s World Cups and the 2008 Olympics, she was in charge of all areas of Women’s National Team administration including team travel, payroll, liaising with clubs, and working with FIFA, CONCACAF and other Federations.

“Cheryl was a highly regarded employee for U.S. Soccer during her time with the Women’s National Team and she has the perfect skill set and experience to help get this league up and running,” said Gulati. “Cheryl was one of the many pioneers for intercollegiate women’s athletics and was immersed in the inner works of elite women’s soccer for five years. We’re excited to have her on board.”

“It was a wonderful experience to be a part of the Women’s National Team for five years and see first-hand the impact that women’s soccer players can have as role models,” said Bailey. “The new league is another extension of that and a vitally important part of the continued growth of the sport in the United States. I am dedicated to ensuring that this league is set up with the best possible business model that emphasizes sustainability above all else while giving players a competitive environment in which to play and creating something special for young girls to aspire to.”

Bailey was the Senior Associate Athletic Director and the Senior Woman Administrator at the University of Wisconsin for 15 years from 1990 to 2005. At Wisconsin, she was the sport administrator for 22 different teams, including men’s and women’s basketball, men’s and women’s soccer and men’s and women’s ice hockey. Bailey developed strategic plans, set policies, oversaw a multi-million dollar budget and fundraising campaigns. She also was involved in the planning and decision-making with the Athletic Board and its committees, which included gender equity/diversity issues, academic, compliance, finance and facility development.

Bailey served on numerous committees while at Wisconsin, including stints as the chairs of the NCAA Division I Women’s Basketball Committee from 2001-2004 and the Women’s Soccer Committee from 1989-1993.

Before moving to Madison, she was the Athletic Director at Denison University (Ohio) from 1979-1990, where she oversaw 12 women’s sports and was the head track and field coach (1981-1988), the head soccer coach (1979-1990) and was an assistant professor, teaching History of Sports, Psychology/Sociology of Sports, Ethics of Sports, Lifetime skills & Activity Classes.