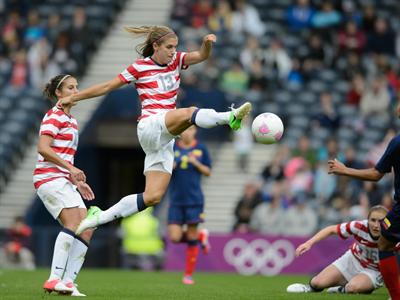 GLENDALE, Ariz. (Dec. 1, 2012) – Forward Alex Morgan scored just 44 seconds into the match and midfielder Megan Rapinoe added a goal seven minutes before halftime as the U.S. Women’s National Team defeated the Republic of Ireland for the second time in four days, winning 2-0 in the seventh match of the 2012 Fan Tribute Tour, presented by Panasonic.

Jogos casino online, The USA moved to 5-0-2 on the Fan Tribute Tour, a celebration of the team’s run to a fourth gold medal at the 2012 London Olympics. The USA will be in action next on Dec. 8 at Ford Field in Detroit to start a three-game series against China. The USA will also face China on Dec. 12 at BBVA Compass Stadium in Houston andDec. 15 at FAU Stadium in Boca Raton, Fla.

U.S. captain Christie Rampone came off the bench for the first time this year, entering at halftime to earn her 273rd career cap. Playing right back, the position she started in many years ago when she debuted for the USA in 1998, Rampone moved past former U.S. captain Julie Foudy and into third-place on the U.S. and world’s all-time caps list. Former teammates Kristine Lilly (352) and Mia Hamm (275) are the only players in history to play more games than Rampone. If Rampone plays in the final three games of the year against China, she will move past Hamm, as well.

Morgan, who scored a first-half hat trick in the USA’s 5-0 victory against Ireland last Wednesday in Portland, Ore., got the USA on the board with a lightning strike just seconds after the opening whistle. Midfielder Lauren Cheney slipped a perfectly-weighted pass behind the Ireland defense into the left side of the box and Morgan made a dynamic run to get behind the ball before lashing a shot from 10 yards out past Ireland goalkeeper Emma Byrne and into the lower right corner.

Rapinoe doubled the USA’s lead in the 28th minute when former Arizona State All-American Amy LePeilbet played a long ball down the left wing to the streaking Morgan. The fleet forward took the ball all the way to the end line before cutting a pass back into the center of the box to the crashing Rapinoe. She hit her shot first-time from 14 yards, past the wrong-footed Byrne, off the leg of a scrambling defender and into the net.

The assist was Morgan’s team-leading 19th of the year and gives her the fourth-most in a single year in U.S. history. Hamm had 22 assists in the final year of her career in 2004 and Carin Gabarra had 21 in 1991. Hamm also had 20 assists in 1998. Those are the only three times a U.S. player has reached or surpassed 20 assists in a calendar year.

Ireland played with a bit more verve during the match Portland, but in front of 11,570 appreciative fans, the Americans dominated possession and territory. The USA out shot Ireland 17-2 and the Irish managed just one shot on goal.

The score would have been much higher if not for some heroics from the six-foot Byrne, who made five spectacular saves in the second half, three of them on excellent efforts from Carli Lloyd.

In the 51st minute, the Irish ‘keeper dove to push Lloyd shot from distance around the post. Two minutes later, Byrne kick-saved a 10-yard shot from Lloyd after she had played a clever give-and-go with Abby Wambach that freed her up deep in the penalty area.

In the 62nd minute, Lloyd returned the favor and played Wambach into the box with a great slipped pass. Wambach cut back to lose a defender and fired hard at Byrne, but she made another good save, knocking the ball down before falling on it.

Byrne made her best save in the 67th minute after Lloyd hit a drive from 30 yards out that was surely headed into the upper-right corner. The long-time Arsenal Ladies ‘keeper fully extended herself and just got a piece of the ball, pushing it off the crossbar in a spectacular piece of goalkeeping.

U.S. forward Sydney Leroux, who graduated from high school in Arizona, came into the match in the 59th minute and almost delighted her hometown crowd in the 75th, but once again Byrne was there to save her team. Rampone raced past two defenders down the right flank and crossed back on the ground to Leroux, whose shot to the near post was scooped away by Byrne.