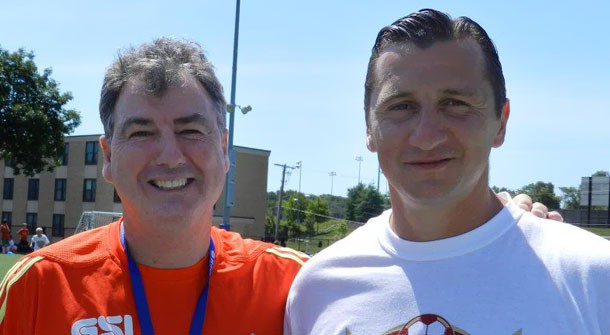 Prairie Village, KS – FC Kansas City announced their inaugural coaching staff today, naming Vlatko Andonovski head coach and Huw Williams as his assistant.  The two coaches can now begin the process of building their team to compete in the new women’s professional soccer league this spring.  “This is a new era for soccer in Kansas City,” said Andonovski, “I am glad that our ownership is devoted to bringing the top women’s talent here and I’m honored that I will get the chance to work with them.”

Vlatko joins FC Kansas City as Head Coach with an incredible soccer pedigree that includes an illustrious professional soccer career as well as coaching some of the country’s finest young soccer players.  Vlatko holds an “A” License, NSCAA Goalkeeping Diploma, and is the current Assistant Coach of the Missouri Comets, a professional indoor soccer team in the MISL.  He has held positions as Director of Coaching for Futura FC, Sporting Blue Valley ECNL Director, and assistant collegiate coach.  He was head coach of the Kansas City Kings of the PASL, and head coach of the girls ODP program for Missouri.  He is the Co-Founder and Director of Coaching at KHMAC Futbol Club.  As a youth coach, he has won four (4) Missouri State Championships and a Youth National Championship.

Vlatko played professionally for 6 seasons in Europe for clubs such as Rbotnicki FC, Vardar, and Makedonija GP.  He played indoor professionally in the NPSL for the Wichita Wings, and in the MISL for the Kansas City Comets, California Cougars, and the Philadelphia Kixx.  During his time in the MISL he received several accolades, including two All-Star selections while with the Comets.

When asked about being selected to coach in the newly formed league, Andonovski said, “I can’t explain how much it means to have the backing of US Soccer, as well as the support from the Canadian and Mexican organizations.  This will be a good thing for women who want to further their careers, but it will be great for women’s soccer worldwide as we continue to grow the game.”

Huw joins FC Kansas City as Assistant Coach with long history of development of the sport in the United States.  Huw holds a USSF ‘A’ License. has coached 32 State Champion teams (most in KSYSA history) and coached two (2) regional champion teams.  He has coached teams to the national final-four four (4) times, and won a national championship.  He has coached state champions in four different decades (80’s, 90’s, 2000’s and 2010’s).  He is a former Director of Coaching for Kansas Youth Soccer, a member of the Regional II coaching staff, and the director of coaching for Avellino Soccer Club. He was the Men’s Coach at Avila University in Kansas City, MO, from 1989-1992.  Huw was the founder and technical director of the KCFC soccer club.  His dedication to soccer and mentoring young people was recognized in 2007 when he was selected the Kansas State and the Midwest premier coach of the year. He was also a NSCAA Midwest Coach of the Year and finalist for the National Coach of the Year Award.  He has coached six (6) youth national team players and an MLS player.

For Huw, soccer has always been a passion. He attended Cardiff College where he played soccer for the British Colleges and the All British Students teams for all four years—the last two years as captain. While at Cardiff, Huw was selected to play in the World Student Games in Tokyo. As a player, Huw joined professional club Blackburn Rovers at age 14 where he played for five years. During this time he was “capped” by Welsh Schools and Welsh Youth teams. Huw played for the national teams for two years, the second as captain.

“I hope that I have contributed a little to some of the success Kansas City girls have experienced on the youth level over the past few years and now I hope I can do the same at the professional level.  I have often bemoaned the fact that most of our top players had to ‘hang up their cleats’ as soon as their collegiate careers were over and way before reaching their prime,” said Williams when asked about how he relates to the women’s game, “This league now provides the opportunity for top players from our community and from throughout the US, Canada and Mexico to compete against each other on a weekly basis.