“In order to continue our success, we think it is essential to provide our players with the best possible resources,” Director of Soccer Operations and General Manager Huw Williams said. “Monitoring our players’ in-game as well as training performances is a high priority as we strive towards attaining a top notch environment here at FC Kansas City.”

“I am very excited to add Matt and Milan to our coaching staff,” Head Coach Vlatko Andonovski said. “Their knowledge, hard work and dedication are going to help the players individually and the team as a whole. I want to welcome them with open arms to the FCKC family.”

Both Briggs and Ivanovic will serve as assistant coaches as well as youth academy coaches. In addition, Briggs will also be the team’s Sports Scientist.

“I feel very fortunate to have been offered this opportunity by Huw [Williams] and Vlatko [Andonovski],” Briggs said. “To be able to work at the highest level of women’s football will be a fantastic challenge and experience and on which I am eager to start.”

Originally from Lincoln, England, Briggs began his coaching career working with youth at the Lincoln City Football Club at their Center of Excellence. After moving to the United States at the age of 20, Briggs began his collegiate playing career at Kansas City Kansas Community College, captaining the team his sophomore year. He transferred to Hastings College for his junior season where he helped lead the Broncos to the NAIA final four. Briggs played his final season at Bellevue in 2004.

Briggs has a USSF A, NSCAA Premier Diploma, UEFA B, FA Youth Module 1, 2 and (3 ongoing) and his Coerver Youth Diploma. 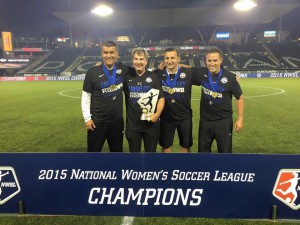 “I am really excited to be back with FC Kansas City and officially join the coaching staff,” Ivanovic said. “Last year was an unbelievable experience and I am looking forward to the upcoming season. I feel that the team has a lot more to show and we will try our best to continue in the same direction as the last couple of years.”

In the last three seasons with the Comets, Ivanovic helped the team win the 2013/14 MISL Championship as well as the 2014/15 Central Division title recording a total of 20 goals and 16 assists.

“Milan [Ivanovic] is one of the brightest soccer minds that I have been around,” Andonovski said. “His knowledge and innovative ideas helped us win the championship last year. I am happy to have him full time on staff.”