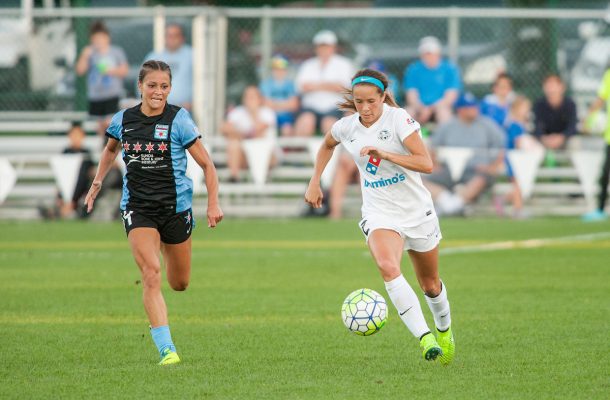 The roster for the USA’s first two matches following the 2016 Olympics – wins against Thailand and the Netherlands in September – featured only players that were in Brazil, but as the U.S. team begins the new cycle leading up to qualifying for the 2019 FIFA Women’s World Cup, Ellis chose not to call up several veterans, making space in camp for 11 uncapped players, eight from the NWSL and three from the college ranks.

“Right now, we are in a phase where we want to try to expand the player pool, look at a number of players and start the long process to qualifying for the next World Cup,” said Ellis. “That means several of our more experienced players won’t be in for this camp while we get to evaluate some different personnel. In order to see if these players can contribute, we need to get them into a National Team training environment and in games.”

All of the new players called up have previous U.S. Youth National Team experience at the Under-23 level or younger. Goalkeeper Jane Campbell, a senior at Stanford, started for the USA in the 2012 FIFA Under-17 Women’s World Cup, was a member of the 2014 U-20 Women’s World Cup Team and previously trained with the senior team for one camp February of 2013 when she was 17-years-old. Campbell joins veterans Alyssa Naeher and 2016 NWSL Goalkeeper of the Year Ashlyn Harris as one of three ‘keepers on the roster.

Chicago Red Stars midfielder Danielle Colaprico also spent time in WNT camps at the end of 2015 and beginning of 2016. For the other nine players, this is their first full WNT call-up.

Ellis named 2016 NWSL Golden Boot winner Lynn Williams who scored 11 times for the Western New York Flash and two more in her club’s playoff semifinal victory over the Portland Thorns. Houston Dash forward Kealia Ohai also scored 11 goals during the regular season. She famously scored the game-winning goal in the 2012 FIFA Under-20 Women’s World Cup Final as the USA defeated Germany, 1-0, to win its third championship for that age level.

“Our staff has been watching NWSL games this season and these are the ones that stood out,” said Ellis. “The league is vitally important to create a tremendous competitive environment for these players to show their talents as professionals and we are excited to give them a chance with the National Team.”

Tickets for the match in Minnesota are on sale through ussoccer.com, by phone at 1-800-745-3000 and at all Ticketmaster ticket centers throughout the Twin Cities area (including many Walmart locations), as well as the U.S. Bank Stadium ticket office (open Monday-Friday at 8:30 a.m. to 5 p.m., with extended hours on Wednesday until 7 p.m.).

For both matches, groups of 20 or more can order at ussoccer.com.