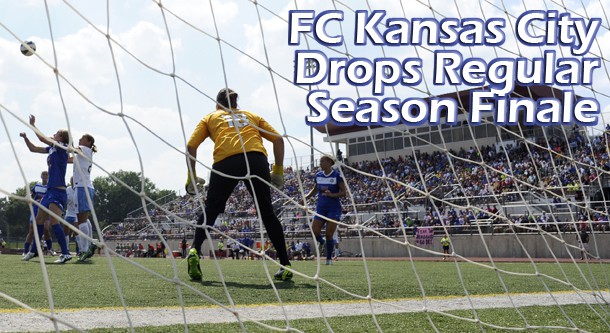 Overland Park, Kansas (August 18, 2013) – FC Kansas City needed only a single point to secure a first-place finish in the National Women’s Soccer League’s regular season.  Courtney Jones scored in the 20th minute, but rookie Jen Hoy scored in the closing minutes of both halves to give Chicago the 2-1 lead.  The team will still play host to the NWSL Playoffs as the second seed in the post-season tournament, as they host the Portland Thorns on August 24th.  Game time will be announced at a later date. 4,910 fans were in attendance to see the ‘Blues’ close out the regular season and see Lauren Holiday clinch the Golden Boot award, given to the player who scores the most goals in the regular season.

Jogos casino online, Last week, Kansas City ended their ten-game unbeaten streak with a loss to the Boston Breakers.  Eager for a win and a new positive streak, the Blues came out with a high pressured attack that gave the team several chances in the first five minutes.  Defender Leigh Ann Robinson suffered a knee injury in the ninth minute that forced her to leave the game. Trainers are hopeful for her to play next week, but won’t know until after she undergoes tests tomorrow.

With Robinson leaving the game Merritt Mathias moved back to the defensive line and Courtney Jones entered the match, taking Mathias spot in the midfield.  The move would take only ten minutes to pay off.  With Chicago driving into the FC Kansas City penalty box, Erika Tymrak stole the ball and sprinted 50 yards down the field.  Drawing the defense to her, she dished the ball to a wide open Jones on the left who slotted the ball towards the back post.  Red Stars goalkeeper, Erin McLeod was able to get a hand on it, but it wasn’t enough to prevent the score.

Chicago’s rookie star, Jen Hoy, stole the spotlight when she managed to find the goal in the 45th minute and the 92nd minute of the match.  The goals catapulted the Red Stars into the lead and prevented FC Kansas City from securing the top spot in the NWSL standings.

FC Kansas City finishes the regular season in second place with a record of 11-6-5.  They will host the first round of the NWSL Playoffs on Saturday August 24th against the Portland Thorns.  Tickets can be purchased by calling 855.4KC.GOAL or emailing [email protected]