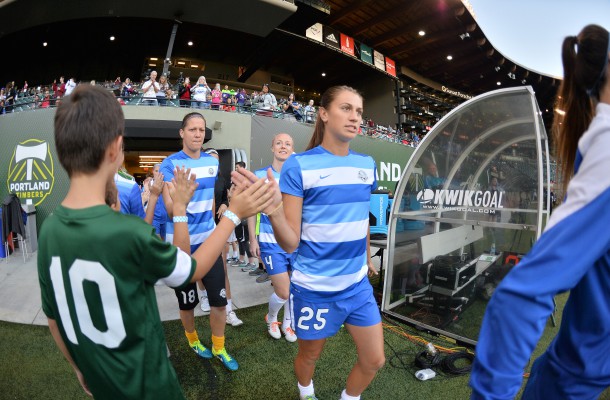 On Sunday March 20, the Blues will visit its former home field, Stanley H. Durwood Stadium, to face the University of Missouri – Kansas City at 1:00 p.m. CT. Coach Chris Cissell’s team finished as the runner up in the Western Athletic Conference (WAC) Tournament with an overall record of 14-6-1.

One day later, FC Kansas City will hit the road as they visit the University of Missouri at the Audrey J. Walton Soccer Stadium. The Tigers finished 9-5-5 last season before falling to LSU in the SEC Tournament. The match will also feature Blues player Kaysie Clark playing against her alma mater.

FCKC’s third preseason game will take place on Saturday, March 26 as Coach Vlatko Andonovski’s team heads to Rock Chalk Park for the fourth year in a row. The University of Kansas will open its spring exhibitions after a 10-9-2 season and as the BIG 12 runner up.

The Blues will then visit the University of Nebraska at the Barbara Hibner Soccer Stadium on Sunday, April 3 at 3:00 p.m. CT. The Huskers finished last season with a 10-7-2 record. Both FCKC and Nebraska will meet for the second time in as many years.

Last but not least, FC Kansas City will play two forty-five minute games against UMKC and the University of Minnesota on Saturday April 9 at 1:00 and 2:00 pm. CT, respectively. Both halves will take place at the Stanley H. Durwood Stadium.

The FC Kansas City preseason roster consists of all players currently under contract with the exception of forwards Amy Rodriguez and Sydney Leroux, due to pregnancy, as well as all three selections in the 2016 NWSL College Draft.