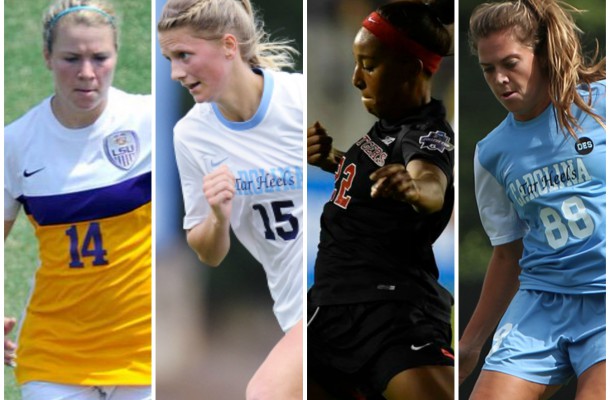 Despite not having a first round pick, the Blues managed to pick four top seniors on Friday morning

Jogos casino online, BOYDS, MD (Jan. 15, 2016) – Despite trading their first round draft pick (No. 8 overall) to the Western New York Flash in exchange for forward Sydney Leroux earlier this week, FC Kansas City’s coaching staff left the 2016 National Women’s Soccer League (NWSL) College Draft with smiles in their faces as the Blues selected four top players, which will report to preseason in Kansas City in March.

“We are coming out of the draft so much better than we were,” Director of Soccer Operations and General Manager Huw Williams said. “We were surprised and thrilled that our first three picks were available for our selection.”

Bowen, 21, is a two-time FIFA Women’s World Cup veteran. The Auckland, New Zealand native became the youngest player to represent her country at recognized international level when she player in a U-17 match on her 14th birthday in 2008 before joining the Tar Heels fresh off her participation in the London Olympics.

During her freshman season, Bowen totaled 1,688 minutes and started 19 of the 20 games she played in and recorded two goals and seven assists. In addition, she was named to Soccer America second-team All-Freshman squad.

Thank you to @FCKansasCity for drafting me and thank you to everyone for your kind words. Exciting times ahead!

Reed, 21, concluded her collegiate career at Rutgers University with multiple awards and accolades. In four years, she appeared in 87 matches and recorded three goals and five assists.

In 2015, the Tinton Falls, N.J. native was the winner of the Senior CLASS Award as well as being named to the NSCAA First Team All-Great Lakes Region and the First Team All-Big Ten after starting all 26 matches at center back for the Scarlet Knights.

Newfield, 24, concluded her collegiate career at the University of North Carolina after transferring from Georgia with two years of eligibility left and earning back-to-back First-Team All-SEC honors.

During her freshman year, she played in all 21 games and led the team with eight goals as well as breaking the school record for shots in a single season (87). The following season, the Decatur, Georgia native had a team-best 18 goals and eight assists.

So thankful to @FCKansasCity for keeping these feet kicking. Let’s get this party started! https://t.co/iJ4MytNRCs

Arlitt, 22, finished 2015 with several recognitions including SEC All-Tournament Team after a very successful collegiate career at LSU. The Houston, Texas native appeared in 89 matches with 87 starts to finish ranked No. 3 in school history in total appearances.

During her time with the Tigers, she scored nine goals and had seven assists on the offensive end of the field.

For more information on Season Tickets and deposits for the 2016 NWSL season, please call 855-4KC-GOAL.