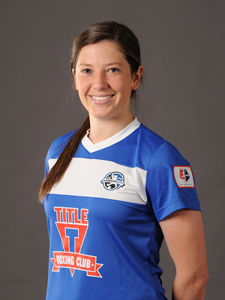 Jogos casino online, Katie Kelly is a local star, having grown up in the Kansas City area and attending St. Theresa’s Academy.  Her senior season she was named Missouri State Player of the Year, Western Region Player of the Year and a High School All-American.

She attended Marquette University and made an immediate impact.  She was named Big East player of the week after scoring a goal and an assist against Northwestern University on Aug 25, 2005 and finished the season with three goals and four assists.  She started every game over the next three years and 88 total in her four seasons.  She finished her career second all-time on the career assists list with 25 tied for third on the career assists per match list with .28, and helped Marquette to 54 wins over the four seasons. She earned four Big East Player of the week awards, named 3rd team All Big East (2007), All Big East Tournament Team (2008), 2nd Team All Big East (2008) and 4th Team All American (2008) as a Golden Eagles player.

After graduating from Marquette with a Bachelor’s in Public Relations she had trials with the Chicago Red Stars and St Louis Athletica of the WPS before moving to Sweden to play professionally for Kristianstad DFF.  Last season returned to the United States to play for the W-League’s FC Indiana.