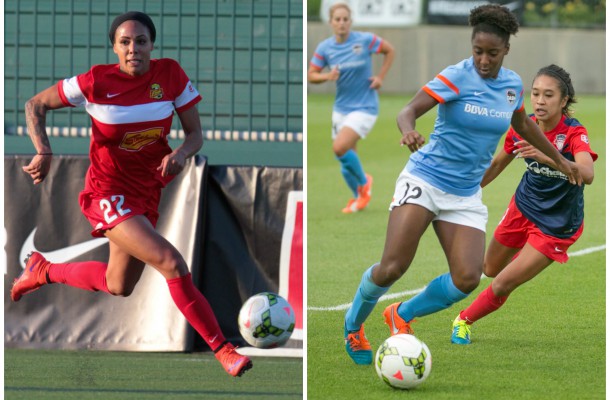 Jogos casino online, KANSAS CITY (Jan. 13, 2016) – FC Kansas City announced today that the team has acquired forwards Sydney Leroux and Tiffany McCarty from the Western New York Flash and the Houston Dash, respectively. Per league and club policies, additional terms on their contracts were not disclosed.

“Although we certainly don’t like losing draft picks, it was important for us to get this trade done without losing any of our current players,” Director of Soccer Operations and General Manager Huw Williams said, ”So we are thrilled to add two dynamic players to our squad without any deletions.”

In the first of two separate trades, Kansas City acquired forwards Tiffany McCarty and Jessica McDonald from the Houston Dash in exchange for a first-round (No. 8 overall) pick in the 2016 NWSL College Draft and an international roster spot.

FC Kansas City then traded McDonald, a 2017 second-round draft pick, which was acquired from Orlando earlier this offseason, and an international roster spot to Western New York for Leroux.

Leroux, 25, has a total of 75 caps and 35 goals with the U.S. Women’s National Team. The Surrey, British Columbia native helped the USA win their third FIFA Women’s World Cup championship last summer as well as being the youngest member of the Olympic gold medal-winning team at the 2012 Summer Olympics in London.

“We are very excited to add one of the most energetic strikers in the world to our team,” Williams said. “We think her abilities will blend very well with our system and anticipate that she will be an important cog in helping us attain our goal for the three-peat.”

“I’m really happy to have Sydney [Leroux] on the team,” Coach Vlatko Andonovski said. “She is a proven goal scorer that every coach would love to have on the team. Her persistence and determination are on a whole different level. I feel blessed for the opportunity to work with her.”

This will be Leroux’s fourth NWSL team in as many seasons. During the inaugural campaign, she led the Boston Breakers with 11 goals and finished second only after Lauren Holiday before being traded to Seattle for the 2014 season were she helped the Reign finish at the top of the standings with five goals. Last season, she appeared in three games and scored once for Western New York Flash.

“I’m thrilled to be playing in Kansas City, a place that my husband and I call home,” Leroux said. “FC Kansas City is an organization with a history of excellence and fans who are passionate and loyal. I couldn’t be more excited to join FCKC as we work towards a third consecutive NWSL championship.”

McCarty, 25, was selected by Houston in the 2014 NWSL Expansion Draft from the Washington Spirit. In two seasons with the Dash, she recorded five goals in thirty appearances.

“Tiffany [McCarty] has shown the ability to be a difference maker in this league as both a starter and as a change of pace player off the bench,” Williams said. “We are very happy to have her on our team.”

“There’s a reason why Tiffany [McCarty] was second pick overall in the draft,” Andonovski said. “She is a player with a lots of potential, a dynamic striker that can make things happen from nothing.”

“FC Kansas City is an incredible organization and I am excited to join the team and contribute in every way I possibly can,” McCarty said. “I am also looking forward to getting started with the players and coaching staff.”

FC Kansas City will now head to Baltimore for the 2016 NWSL College Draft, which will take place at the National Soccer Coaches Association of America (NSCAA) convention on Friday, January 15 at 10 a.m. ET.