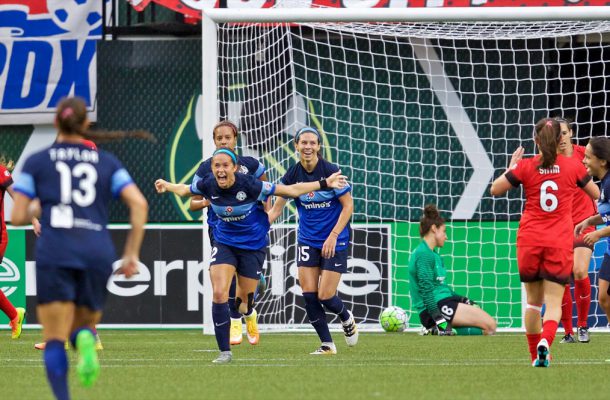 KANSAS CITY (October 9, 2016) – FC Kansas City announced its 2016 team awards on on Sunday ahead of the National Women’s Soccer League championship game. The three awards, which were voted on by fans of the franchise, were Most Valuable Player, Defender of the Year and Rookie of the Year. Coaches selected the Golden Boot Winner.

The veteran goalkeeper led the National Women’s Soccer League with 83 saves and tied for first with six clean sheets. She played all 1,800 minutes of the season across 20 games and allowed just 20 goals in that span for a 1.00 goals against average. She saved 81 percent of the 103 shots on goal she faced. Barnhart will spend part of her off-season with the U.S. Women’s National Team as a coach for the upcoming Girls Fantasy Camp that starts in late October.

Defender of the Year – Brittany Taylor

The second award goes to the Blues’ only other iron woman. Taylor, who was acquired in the off-season in a trade with the Western New York Flash, strengthened the back line with her consistency. She and the rest of the defenders allowed just 20 goals despite facing 103 shots on goal. Taylor also provided some pressure on offense with 14 shots and four on goal for the Blues.

Newcomer of the Year – Katie Bowen

The 2015 NWSL College Draft second-round selection played just 13 games for the Blues this year, but made a quick impression. She split time between FC Kansas City and playing in the 2016 Rio Olympic Games for the New Zealand National Team. Bowen contributed to one of the most oppressive defenses in the league as the Blues allowed just one goal per game. She also added an assist on offense.

The Blues’ homegrown forward led the team and tied for fifth in the NWSL with eight goals in her second professional season. She also ranked fifth with 48 shots and 25 on goal. Groom’s performance this season earned her a spot on the next U.S. Women’s National Team roster head of two matches against Switzerland.

Tune in to Fox Sports 1 at 4 p.m. CT to watch the Washington Spirit and Western New York Flash battle for the title. It will be either team’s first trophy in the four seasons of the league.