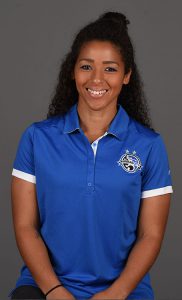 International - Scott has previously represented Canada on the U16 and U19 youth teams. After being called up to the senior squad by Carolina Morace, she debuted at the 2010 Cyprus Cup and participated in her first FIFA Women’s World Cup at the 2011 event, making two substitute appearances. Under coach John Herdman, Scott became a regular pick and won a gold medal at the 2011 Pan American Games.

At the 2012 London Olympics, Scott won praise for her performances in the defensive midfield role, drawing comparison to the male footballer Edgar Davids She had a major contribution for the team in the bronze medal game, clearing a ball off the line in defence of the goal to keep the score even at zero. Upon return to her native Winnipeg, Scott was serenaded with chants of her name and outbursts of song consisting of the Canadian national anthem at the Winnipeg airport. Scott took note of the welcome with pride saying that “I’m a very emotional person. To come home and hear my name being screamed… I’m holding back tears right now.”

“The Destroyer” was part of the Canada roster, which hosted and participated in the 2015 FIFA Women’s World Cup where she played an important role in the team that reached the quarter finals before falling to England 2-1.

Vancouver WhiteCaps FC- In total, the Winnipeg, Manitoba native started 11 of her 15 W-League appearances, contributing one goal and one assist in 2010 to help the ‘Caps reach the W-League championship final, while also playing on the squad that won the league title in 2006.

From 2005 to 2009, Scott played Canadian Interuniversity Sport (CIS) soccer for the University of Manitoba. Her accolades with the Bisons included being named a first team CIS All-Canadian in 2009, as well as twice earning Canada West All-Star honours and winning the Canada West Rookie of the Year award in 2005.

Internationally, Scott has become a key member of Canada’s senior women’s national team. This past January, the hard-nosed midfielder started all four of her appearances in the 2012 CONCACAF Women’s Olympic Qualifying tournament held at BC Place. She earned praise for her performance as Canada won a silver medal and a spot in this summer’s 2012 London Olympics. In total, Scott has started 20 of her 42 appearances for Canada since her debut in 2010. On the youth level, the Northwest Hurricanes product started all eight of her appearances for Canada’s U-20 women’s national team, playing in the CONCACAF Women’s U-20 Championship and the FIFA U-20 Women’s World Championship.

UNITED SOCCER LEAGUES W-LEAGUE
2010: The midfielder appeared in seven games and two playoff games for the blue and white contributing one goal and one assist. Scott helped carry the ‘Caps to the W-League Championship where they eventually fell to Buffalo in the final.

2006: Scott appeared in five matches for 450 minutes of action for the Caps, which saw the team winning their second W-League title that season.