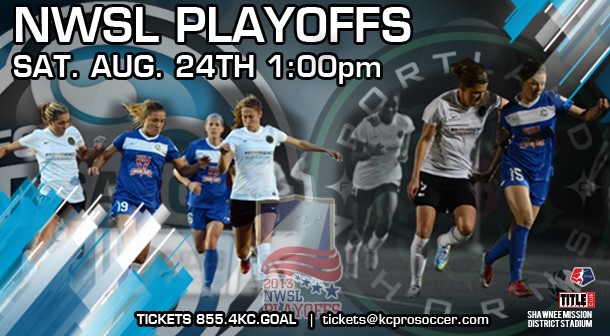 PRAIRIE VILLAGE, Kansas (Aug. 23, 2013) – The post-season has officially started for FC Kansas City and the other three remaining teams of the National Women’s Soccer League. The second seed ‘Blues’ will host budding rival Portland Thorns FC on Saturday August 24 at Verizon Wireless Field. FC Kansas City is coming off a loss in the final game of the regular season to the Chicago Red Stars while Portland visits after a 2-1 win against Seattle. The winner of this match will go on to face Western New York or Sky Blue FC in the inaugural season championship.

On Sunday, FC Kansas City hosted the Chicago Red Stars for the final match of the regular season. At this point, the playoff teams had already been decided. The ‘Blues’ were playing for home field advantage throughout the post-season along with placing first at the end of the season. Chicago had already been eliminated from making the playoffs, but they still had something to prove. The match started with a bang, Kansas City was determined to set the momentum of the game. The team rattled off several shots in the opening minutes.

Kansas City defender Leigh Ann Robinson went down early in the match with a right knee injury. She would not return to the pitch for the remaining minutes. Courtney Jones was brought in for the ‘Blues’ while the lineup shifted to cover Robinson’s position. The addition of Jones would prove fruitful when NWSL Rookie of the Year, Erika Tymrak passed up a ball to Jones for the first goal of the match in the 20th minute. Chicago’s Jen Hoy would answer that goal in the 45th minute. Melissa Henderson appeared to put the home-side back on top, but an offside call from the Assistant Referee negated the score and kept the score tied at the half. With FC Kansas City only needed a draw to secure the top spot on the NWSL table, they seemed content to end the game in a tie. Chicago’s Hoy would ruin the party for Kansas City though with a score in the 92nd minute, giving Chicago the 2-1 win. Despite the loss, FC Kansas City still secured the second seed and the right to host the opening game of the NWSL’s Inaugural Playoffs.

Portland Thorns FC visited Seattle Reign for the last game of the regular season on Saturday night. Portland’s allocated forward, Alex Morgan, was still out with a minor MCL sprain in her knee. With Western New York’s win, Portland could not place above third in the standings, making this about the space between Sky Blue and Portland. The Reign had already been eliminated from playoff hopes earlier this month. Similar to Chicago, Seattle came out with something to prove. Megan Rapinoe put the Reign on the board in the 3rd minute. Even though Christine Sinclair’s scoring partner, Morgan, was missing she still delivered for the Thorns scoring a goal in each half. The first came just 5 minutes after Rapinoe’s and the second would come late in the second half. Rapinoe almost had an equalizer but Portland’s Karina LeBlanc would stop the ball. The game had plenty of action; Portland had 6 shots on goal while Seattle had 8. Portland would take the three points home from Seattle.

As for Saturday, this will be the fifth meeting between FC Kansas City and Portland Thorns FC. Every game has been high energy and some of the most watched matches of the season. The record between the two clubs and goals scored in those matches is in favor of Kansas City. The ‘Blues’ lead the series at 2-1-1 and goals at 9-7. Portland will be going against some of the best players in the league and the country. FC Kansas City has 6 players being called up for the United States Women’s National Team along with sweeping the first four NWSL awards. Alex Morgan will be in Overland Park on Saturday, but her actual playing status will be a game day decision. These two clubs are second half favoring teams, both have higher totals for goals scored following the halftime break. The ‘Blues’ outrank the Thorns in goals scored. Kansas City has scored 34 goals this season. Kansas City has not allowed a goal in the run of play at home to Portland this season.  The only goal coming on a Penalty Kick in the league’s opening night game.

FC Kansas City hosts the first playoff match of the day at 1 PM CT. It will be played on Verizon Wireless Field in Overland Park on Saturday August 24th. The game will be broadcast on Fox Sports 2 and streamed on FoxSoccer2Go. The winner of this match will continue on to the NWSL 2013 inaugural season championship next Saturday, August 31st. Tickets for Saturday’s match can be purchased by calling 855.4KC.GOAL (855.452.4625) or by emailing [email protected]